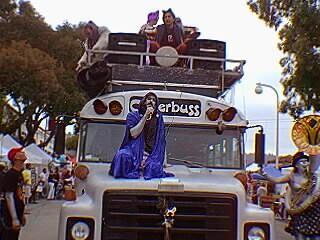 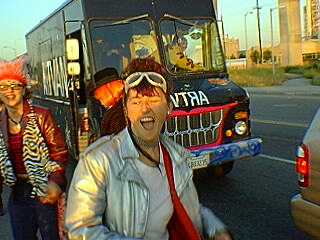 MORE ABOUT PHAT MANDEE
Ladies and gentlemen, please prepare your citizenry for the coming onslaught which is Phat Man Dee. With her mesmerizing 3 octave range, jazzmen, poets, and bellydancing lovelies, Phat Man Dee hails from the hinterlands of Pittsburgh, Pennsylvania to descend upon your fair city on January 9-13.
www.phatmandee.com

ATTENTION WEST COAST fhREaKs
We will be fully geared up on da buss and fhREaKinG da streets before and after gigs, and on the way from gig to gig.  Please come out and fhREaK out wid Phat Mandee and her Pittsburg crew. 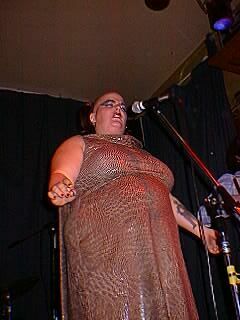 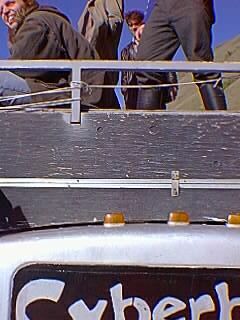 SATURDAY
Jan 13, 2001
The Great American Music Hall
Meet at 1:00 PM
The whole reason Phat Man Dee is dragging all her musically talented buddies across the great Americas in the dead of Winter is because of this gig.... I'm performing a 45 minute set, next to last on the bill, before Mongoloid and the Mongo-lettes @:
Laughingsquid 5.0
What: Laughing Squid 5th Anniversary Celebration
Who: Laughing Squid, an resource for independent art
and underground culture in the San Francisco Bay Area
Where: The Great American Music Hall 859 O'Farrell Street, San Francisco
When: Saturday, January 13th, 2001 doors 7:00pm, show: 8:00pm
Price: $15.00 in advance through ticketweb.com or
at the GAMH box office -- $18 at the door Website: www.laughingsquid.com


EVEN MORE ABOUT PHAT MANDEE
Phat Man Dee has been said to sing like a lark, "a really disturbed, multinational lark". Not only does she sing in seven languages, play cello, eat glass, and mesmerize audiences of more socially and culturally diverse backgrounds than a 3 am bus out of Vegas, her jazz band, Margalit and the Liquitones has been called "an abomination... an experiment in musical suicide" and "stunning, divine, and musically inspired".Phat Man Dee has been seen with such companies as Queer Theatre, Pittsburgh Irish and Classical Theater, The Bull Seal! Collective, Time Space Theatre, The Moritu Gypsy Dance Ensemble, Simon Jaeger and Friends, and has worked on the Burning Man Project since 1997. She has made 2 national tours with Chicken John's Circus Ridiculous, of San Francisco, CA, and the Bindlestiff Family Roadshow.
http://www.phatmandee.com/promo.html

Mail us if you would like to be on our mailing list to receive our
fREakY,
sporatic
CYBERBUSS Newsletter
keeping you up to speed with all CYBERBUSS
events,
updates,
pranks
and news.